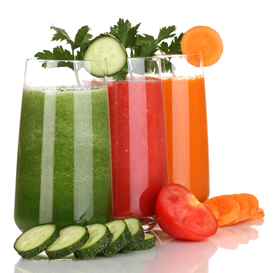 We’ve recently started juicing in our home. Well, my husband has been doing it on and off for years. His on time always seemed to be when I’ve been pregnant and the taste of the juice was not appealing. I’m glad this time around that I’m not pregnant and that I can finally give it a try. My husband first learned about juicing from reading about Jack LaLanne. For those who aren’t familiar with Jack, he is

described as being a fitness, exercise, and health expert. When he was 15 he was introduced to healthy living by Paul Bragg (as in Bragg’s Apple Cider Vinegar, etc…). Jack made a life change after learning more about Paul and went on to be an advocate for and a great example of healthy living. Just to give you an idea of how healthy he was, in 1984 at the age of 70 while

being handcuffed, shackled and fighting strong winds and currents, he towed 70 boats with 70 people from the Queen’s Way Bridge in the Long Beach Harbor to the Queen Mary, 1 ½ miles away. You can see why my husband was drawn to learning more about him. 🙂 We bought the Jack LaLanne juicer shortly after this discovery and my husband tried his hand at it. He really liked it but somehow it didn’t stick. Several years later we watched the movie Fat, Sick, and Nearly Dead. It was very eye-opening for my husband because he has struggled with his weight since our first child was born almost 11 years ago. He really wanted to lose the extra weight and be healthy and fit again.

Since that time he has tried to do what Joe Cross in the movie had done but it’s very difficult for someone who has to go to work everyday and can’t just sleep through the first week of detox. He’s tried several other ways of bringing the benefits of whole foods in without juicing but didn’t ever really see the results he wanted. We are all, as a family, making a more conscious decision to eat healthier. One of the things I really wanted to incorporate into this healthier eating, was juicing. We don’t exclusively juice but it is usually what I now have for one of my daily meals. I can say that I feel so much better each day, especially the longer I do it. What used to be something that tasted horrible is now something that my body craves! So why juice instead of just eating a big salad or making them into a smoothie? I’m not saying that you should exclude either of those options but juicing is such a great way to get lots of nutrients into your body without eating a monster sized meal of leafy greens. 🙂 You do lose out on the benefits of fiber if you exclusively juice. We have found that you need a good balance of both in order to have a well rounded diet.

Cherie Calbom, also known as “The Juice Lady”, earned her Master of Science degree in whole foods nutrition from Bastyr University. She is the author of seventeen books about health and nutrition. Cherie says that the benefits of juicing can include (source):

We will be doing a series that talks about each of the vegetables and fruits that we juice regularly as well as highlight some other products that we use in addition to just juicing that help you get additional (and much needed) nutrients. Stay tuned!

5 thoughts on “Juicing…What’s all the Hype?”

Searching is in progress

×
Subscribe to the Modern Wellness Newsletter
Here is a list of some of the things you can expect to see in our Newsletters: